Most people driving along Trask Bridge Road probably don’t know that they are driving through history.  In 1835, not long after the settlement of Rockford, people starting searching for places to call home.  According to the book, “Pioneers of Winnebago and Boone County, Illinois who came before 1840”, John Manchester brought his family to the Burritt Township area in 1835.  Burritt Township was the fifth area to be settled in Winnebago County.

Manchester was born in New Brunswick, Canada in 1788. He married Elizabeth and sometime in 1835, the family arrived in Winnebago County.  One can only imagine what went through the minds of the first settlers to an area.  There were a few families that settled this are around the same time including,  Isaac Hance, John McIntosh, A. M. Sherman, Elias Trask, Alva Trask.  Alva started the first ferry service across the Pecatonica River in May of 1836.  Most of these families were directly from England, Scotland or Ireland and made their living as farmers.

Life was hard then and the mortality rate for children was especially high.  The Manchesters had six children and must have considered themselves blessed when they made it to adulthood.

The Manchester family decided to establish a settlement at the intersection of Trask Bridge, Winnebago  Road and Cemetery Road.  Though there are no remains of this little endeavor, it once contained a blacksmith shop, a wagon shop, an inn and a post office.  The settlement only lasted until 1875 and not many remember it today.

Also forgotten is a little cemetery that also bears the Manchester name (though some refer to it as the Atkinson Cemetery).  Unlike the other little burial grounds that dot the back roads of Winnebago County, the Manchester Cemetery has been completely abandoned.  It lies on a little hill completely covered by tall grass, thick brambles and fallen logs.  The stones are mostly gone and those that remain are broken.  The names of the dead are mostly indecipherable today.

There was an attempt made to clean away the brush and return the stones to their proper places in 2003.  The combined efforts of Illinois Comptroller Dan Hynes, Burritt Township Supervisor, Roger McDougall and Boy Scout Buddy Crabb and his fellow troop members cleaned years of brush away to reveal the few remaining head stones.   Buddy became an Eagle Scout and received an award from the Illinois Comptroller’s Office for his hard work organizing the clean- up.

But nature has once again reclaimed this woody hill and destroyed any progress that was made.  It is now completely covered by long grass, fallen branches, and thorny bushes.  But there are a few worn and broken stones with the names still etched on them. 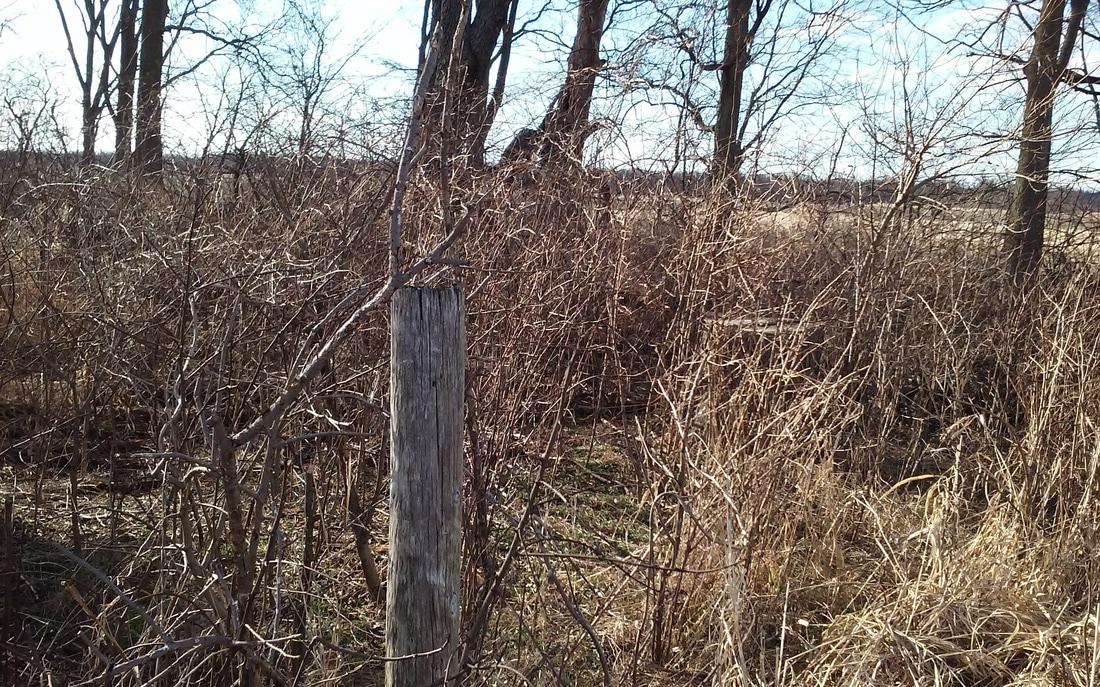 Reverend William Stillwell started the first church in the Burritt Township and was buried on the western slope of the small hill.  His broken stone leans against a tree no longer marking the place where he was laid to rest after his death in May of 1850.

Catherine Brainard, wife of Aaron Day Brainard, was buried there by her loving family when she died in December of 1855.  The family had moved to Burritt area around 1847 from New York where Catherine and Aaron were born.

One of the earliest burials in the little cemetery was Catherine McIntosh who died on September 27, 1840 at just twenty one years old.  Her son, Henry would join her when he died on September 23, 1841 and her husband, John S. in 1866. They were one of the first families to settle in the area that would for a short time be named the Manchester Settlement.
John Manchester, the patriarch of the family moved to the area from New Brunswick in Canada with his wife, Elizabeth in 1835.  They would eventually have six children and be considering a leading family in the settlement.  They opened a blacksmith shop located where Cemetery Road meets Trask Bridge Road.  The settlement also had a wagon shop, an inn and a post office.  Most of the original families moved away from Manchester and nothing remains to show that the town existed.

John Manchester died in his son’s Joseph’s home in 1859, not far where he had “pitched his tent when he came as a pioneer.”  His broken tombstone is all that remains from the family that once was a founding family of the area.

The burial records of many children’s names bears witness to the harshness of survival in those early days of our county.  Family records state that eleven year old Samuel M. Russell, son of Isaac and Comfort, was killed by a colt in 1845.  Lydia, daughter of Isaac and Caroline Hance was only ten when she died in 1843.

The family of Joseph and Mary Scott mourned their two month old little baby, Julius who was a twin to his sister, Julia Ann in 1844.  The Scott family came from Ohio in 1838 and Joseph and  his son, William would later serve in the Union Army during the Civil War.  Joseph and Mary Scott had ten children which included three sets of twins.  The family left the area after the war leaving their son at rest at the top of the hill to be found one hundred and seventy two years later.

Though it saddens one to realize that the people buried here were the pioneers of this area and certainly deserve a better remembrance than this little abandoned hill.  They are part of the history of their little settlement and of Winnebago County.

They came from different states and some even from different countries to settle here much like many people in Rockford  have.  Their tombstones stones may be broken and worn down but these people will never be forgotten.  There will always be someone who will feel compelled to discover and share their stories.