People, Places and Everything Else in Rockford, IL

Climb aboard Inter Urban Trolley and we'll trek around the city and other interesting places.  Of course, this is a virtual trek since trolley cars run on rails and the rails on the streets are gone except for the rails for Trolley Car #36 now stationed at River View Park.
Upcoming Event!
Annual Potluck Picnic and Election of Officers
Sunday, September 15, 2019
4:30-6:30 p.m.
Tinker Swiss Cottage Museum & Gardens,
Barn Lower Level
Program: 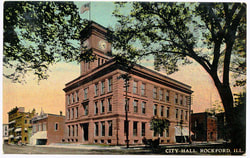 Old City Hall
Rockford, Illinois
OLd City Hall was built during Charles Jackson's term of office as mayor. Brouhaha surrounded its construction from the need to replace bricks, to skirmishes with the architect, and general lack of surity about the project.

Old City Hall Apartments was built in the shell of the former city hall. The historic building was transformed in 1995 into 31 unique residential units also using the section 42 Tax Credit program. The three-story building offers attractive lobby and staircase, extensive wood work and even a clock tower. The modern apartment homes include several efficiency, one and two-bedroom floor plans with an overall average size of approximately 618 square feet. It is located at 126 S. First Street in Downtown Rockford.